for soprano saxophone and marimba
Atmospheric Escape was written in 2015 for Amy Robinson (Mikalauskas) for a performance at the 17th World Saxophone Congress and Festival in Strasbourg, France. The term "atmospheric escape" refers to the process by which molecules in the outer layers of Earth's atmosphere escape the pull of gravity. This process is possible by the repeated collisions of particles. Structurally, this piece follows the journey of a series of particles colliding through the edges of space while attempting to escape the tenacious pull of gravity.

Musically, this process manifests itself as the persistently unstable nature of the rhythm and the harmony. Two unstable rhythmic concepts are used throughout. The first of these concepts can be seen in the first few minutes of the work where the marimba part employs a consistent use of unusual note groupings over a constant pulse. For example during one section, the left hand of the marimba plays a sound every 13th subdivision of the 16th note while the right hand plays a sound every 5th subdivision of the 16th note. This gives process the off-balance sense of two tempos occurring simultaneously. The second unstable rhythmic concept is the used of simultaneous rhythmic ritardandos. The resultant sound of this concept is of two (or three) lines slowing down at different paces. The advantage of writing out the rhythms as opposed to having the performers slow themselves is that the last note of the ritardandos can be aligned.

This work was premiered in 2015 by Corey and Amy Robinson at the 17th World Saxophone Congress in Strasbourg, France and can be purchased through Murphy Music Press at http://murphymusicpress.com/products/c-195. 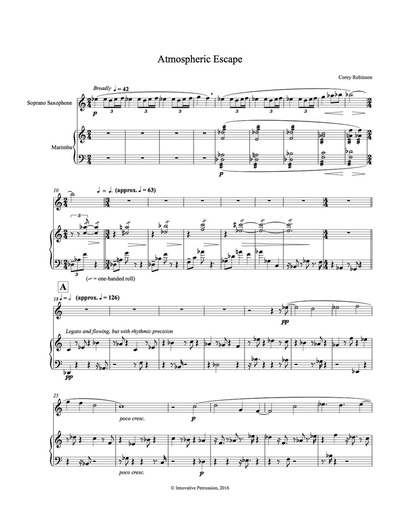 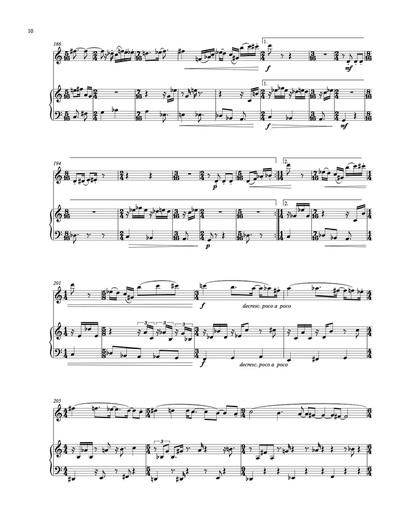 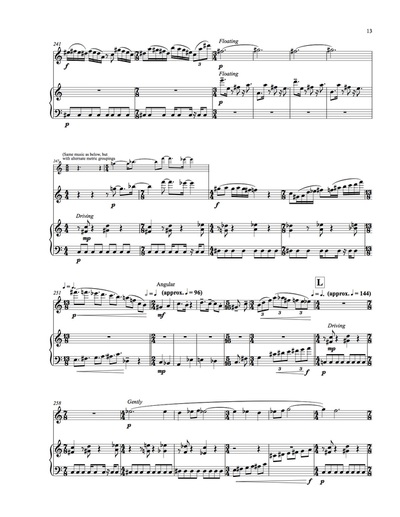