for soprano saxophone and marimba

Sen[nigh]t Sonata was composed in 2015 for Amy Robinson (Mikalauskas) with the purpose of broadening
a still sparse repertoire of percussion and saxophone duets. Sennight is an archaic word for seven
days and nights that has a much darker tone than the modern term, "week." The dark and complex
nature of the tonal structure is evident from the first measure while the number 7 plays an integral
role in the structure of the work. The most structural goal point of the piece is the arrival on
B-natural in measure 216, seven half-steps above E. Seven is also realized as meter, the number of
notes in a motive, and the combination of harmonic and melodic 3rds and 4ths. The use of brackets
in the title highlights the word "nigh." Nigh is defined as "nearly" or "almost" and is used to
describe the form of the piece as nearly, but not entirely in sonata form. The combination of these
seemingly unrelated words creates an imaginary landscape on which a listener can hear a
conversations between the marimba and the saxophone.

The work remains traditional in form while employing a post-modern approach to tonality. Key
areas are set and expounded upon while traditional major-minor triad relationships are avoided.
The tritone replaces the dominant as the goal point in each section of the piece. The opening theme
of the sonata centers around the pitch E while the second theme is grounded on the repeating
B-flat in the marimba. The development begins centered on E, wanders up through F-sharp and A,
eventually becoming fixed around B-flat. This B-flat ultimately requires a re-start to finally gain
enough energy to rise up to B-natural. The B-natural in measure 216 marks the goal of the opening
E and the end of the development of the traditional sonata form.

The recapitulation is reversed to provide the harmonic foundation for a descending line from B
through A and F-sharp, finally arriving on E, essentially reversing all of the progress that the piece
had made so far. Sen[nigh]t Sonata concludes with a bout of rhythmic and harmonic density
confirming the original key area of E.

The mix of traditional and modern elements preserves the evocative character of tonal music while
still employing the complex compositional techniques characteristic of much new music.


This piece was premiered at the 2015 North American Saxophone Alliance Regional Conference in Dekalb, IL and is published by Innovative Percussion Publications, Inc.
Purchase Here 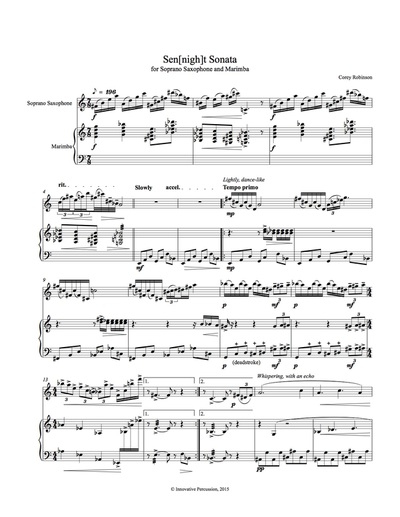 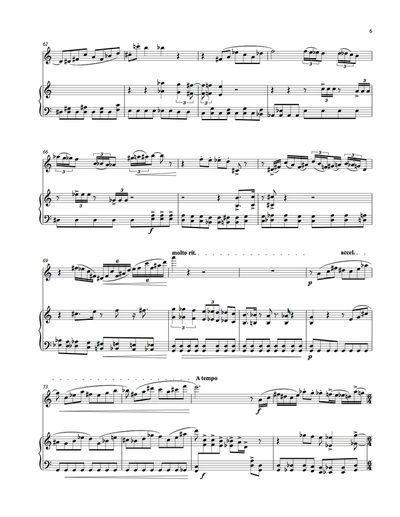 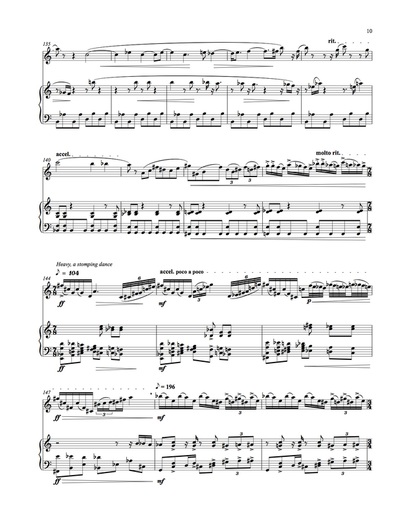